We bring you the best Pad Printing Machine both the worlds, Open Ink-Well as well a Closed Cup.

The print area of an open system is generally much larger than with a sealed system because there are no major limitations as to how wide a doctor blade or plate can be made. Long images on plastic housings (i.e. televisions, computer monitors, vacuum cleaner parts) are usually pad printed with an open well machine.

Doctor blades are much cheaper than Closed-cup. more designs can be accommodated in Pad Printing Plate thereby reducing Cost per print

Color adjustments are made quite easily with an open system, especially when the color needs to be modified on the fly. Color Registration in case of Multi-Color printing is also very fast. Closed systems present problems with color adjustment because they only have a small access hole for adding ink or thinner. Looking at the ink to adjust color is simply impossible

Closed-Cup Pad Printing Machine’s only moving part is the sealed ink-cup which does the doctoring operations. and can be managed easily. Highly trained operators are hard to come by in these times therefore it makes the first choice for new customers who have just started Pad Printing

No Ink Evaporation / No pungent Odor

As the INK used is poured in a sealed cup it doesn’t come into contact with Air therefore there is no Evaporation and no pungent Odor moreover it reduces your INK requirement. This makes a lot of difference if you are using EXPENSIVE inks

As there is just closed cup to manage over the plate it makes it much easier and faster to change plates thus reducing downtime.

We bring you the best Pad Printing Machine both the worlds, Open Ink-Well as well a Closed Cup. The first machines were manually operated. Very high quality watch and instrument dials have been printed over the years using hand powered machines. Now the only reason for buying them is the initial cost.
They are not really entry level machines except where printing is carried out on a small scale. Print rates are very low and maintaining quality over a continuous run is extremely difficult.
A well engineered unit can be useful for proofing plates, pads, inks and designs as an alternative to taking a production machine off line. There are many machines of this type out in the field as it was the original system designed in the late 1960â€²s early 1970â€²s that has been used as the basis of many clones. Original machines were mechanically operated giving little opportunity for adjustment of individual actions as the inking mechanism and pad horizontal action were tied together on the same drive. Adjusting the speed of the main drive motor controls the overall speed of the machine. Later more sophisticated mechanically driven machines gave greater flexibility of adjustment. This is a very robust system that is unaffected by fluctuations in air line pressure. It gives a smooth action and has been used extensively with larger machines working on long runs.

The concept has developed and a host of machines have been produced using electro pneumatics and even servo motor drives. PLCâ€™s (Programmable Logic Controllers) can provide a wide range of sequencing options. Whatever the degree of sophistication the control of ink conditions is problematic due to the large surface area exposed to atmosphere. This can be ameliorated in different ways. Some manufacturers help reduce evaporation by shrouding the inking mechanism and ink well and others by using ink pumps and solvent addition systems.

Changeover of ink and plate can be carried out relatively quickly by removing the ink tray containing the plate and replacing it by another that has already been prepared. Consideration regarding the cost of spare ink trays must be given, as they can be very expensive. The ink tray can be designed to catch ink that spills over the front of the plate, thus keeping the machine cleaner 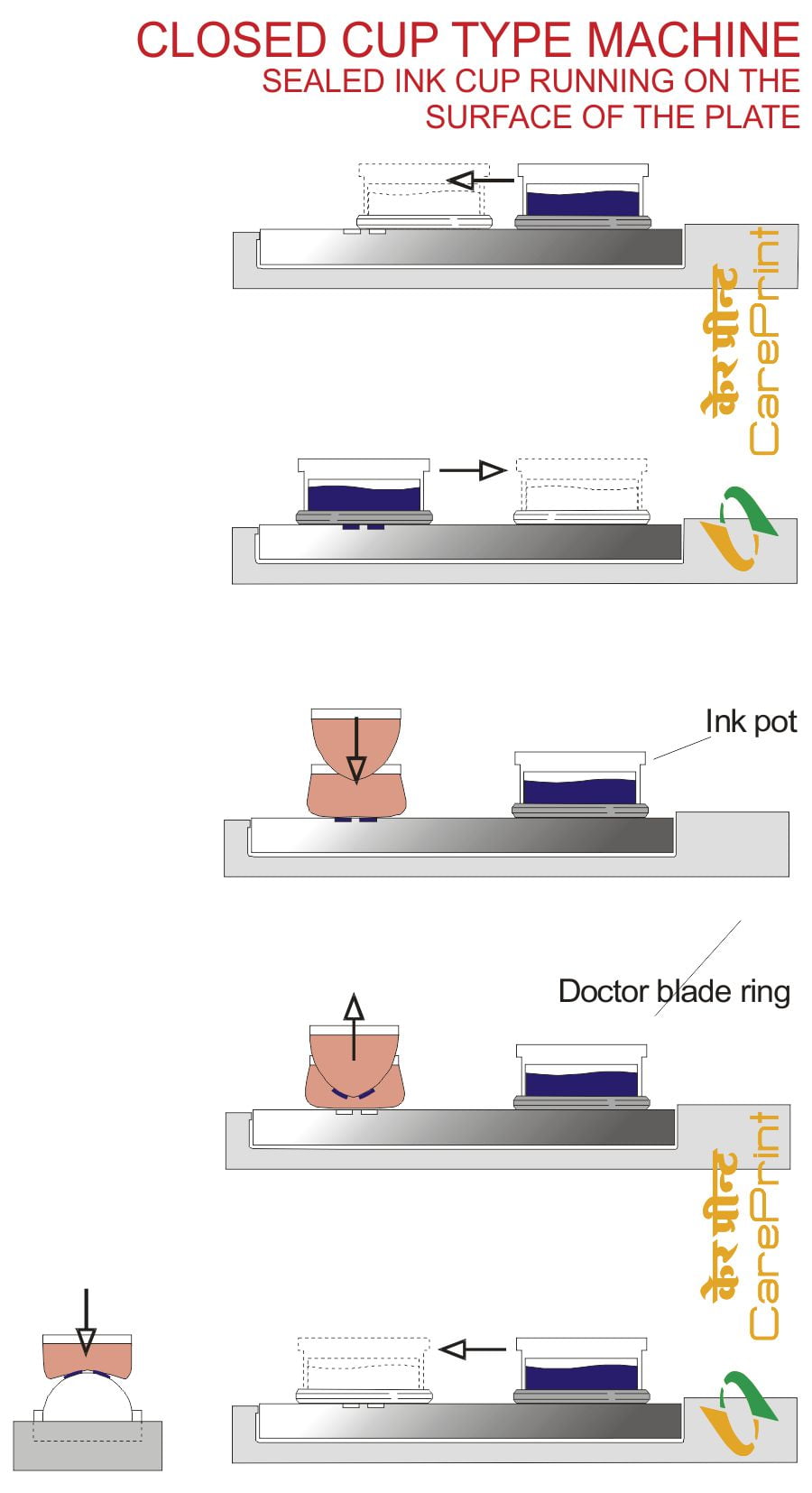